Posted by John McGee on Mar 21, 2011 in Uncategorized | One Comment 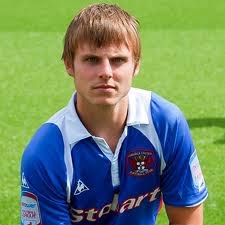 Today’s profile has been penned by John McGee, author of a thought provoking post for us on fan ownership just a few weeks ago and steward of the site, Bring me the Head of Keith Mincher. Now, John, one of the few bloggers outside The Two Unfortunates whom I have actually had the pleasure to meet in person – and confirmation therefore that at least some football bloggers are real people – has provided some thoughts on a canny summer signing from Greg Abbott.

Summer, the hardy football fan’s least favourite season. A time devoid of anticipation, when each rumour spewed out by a man who knows someone who delivers the bread rolls to the training ground — who is it, who is it?

Invariably they’re never true. That bid you’ve made for Orient’s Stephen Purches is hokum and your last minute ‘swoop’ (why always a swoop?) for Richard Brodie was gazumped by Steve Evans’ Crawley Town.

So when Carlisle manager Greg Abbott stepped in front of the cameras on the first day of pre-season training and declared he’d have a new signing ready ‘in about an hour’ we all chose to ignore the whispers from the previous evening that it might be Huddersfield Town Reserves midfielder James Berrett. Just stirring we hoped — probably the Warwick Road postman’s cat made it up.

Underwhelmed — the only word to sum up my feelings as Berrett was paraded at Brunton Park. What did we need with another deep sitting midfielder, especially one who couldn’t break through at the same level and who looked like a 15 year old cast off from a recent Oasis video. That he was free and that Abbott had a burgeoning reputation for what Clough and Taylor called ‘finding one’ assured me it wasn’t a certain lost cause. At the time he was undrawn on what many fans considered a punt — ‘I heard he might be available and I had a nice recommendation from a good friend of mine, so he’s here’ was all we got, his delight belied by the glint in his eye that only appears when he’s pleased with himself.

Nine months later and Berrett is the fulcrum of a successful season. The answer to why we needed another defensive minded player? So all three could play and the attacking prowess of Francois Zoko and Ben Marshall could get its head. In truth Berrett’s range of passing is the ideal counterpoint to the all action tackling machine Tom Taiwo and the calm headed guile of Paul Thirlwell — a player who Abbott admitted he’d bought as back up has been an ever present.

But that’s only half the story. To his calm range of passing Berrett’s added an impressive eight goals (third to Zoko and the departed Gary Madine in the United scoring charts) from midfield and an astonishing 21 assists. The latter figure is thanks in no small part to his ability from set plays — his corners and free kicks have been a revelation; three of his goals have come from the penalty spot, solving a quandary born of Ian Harte’s departure to Reading which saw the straight kicks miss the mark.

His ability to swing the ball into the danger zone is such that every United fan’s hackles rise a little when the ball nicks off a covering defender on its way to the advertising hoardings. That he’d never taken a single corner before summer makes this all the more remarkable — Abbott and assistant Graham Kavanagh dragged him out of training camp to practice set pieces after backing their instincts on his technique. The apocryphal myth is that his first effort failed to make the penalty area — thank heavens for persistence.

Berrett’s replacement at the Galpharm, Scott Arfield cost the Terriers £600,000 and has struggled to make a bigger impact than the man whose place he took. Abbott, that glint returning every time he is quizzed on the subject, has been a little more loose lipped since summer about his supposed ‘punt’. The ‘friend’ who gave hope to Greg’s hunch was ex-Terriers man Andy Ritchie who told Greg that Berrett was worth a go at £50,000 — when told he was available for free he had some extra advice for his pal — ‘if that’s the case then drive down there and pick him up yourself’.

It should go down as the best value tank of petrol ever bought.

thinks about Carlisle United all the time. His stock in trade is viewing the world of football in embittered fashion with a Cumbrian bias. Seldom does he fail to invalidate an opinion by slipping into lamp-jawed gobshitery. Like any sane man, he prefers his defensive midfielders to read the play and only ever pass sideways.